A note about Zombies & the infection:

It may alarm you to learn that nearly everyone is already infected — to some degree — by the zombie virus. And it is a certainty that everyone is affected by it.

Because it may come as some relief that being infected by the zombie virus does not necessarily make one a “zombie”. In fact, full-on Zombism is rare. And while an actual antidote to the Zombie Virus is uncertain, we do have the power to resist it.

What is the Zombie Virus?

The zombie virus is a minimizer of potential. The infection is highly contagious and spreads with ease. Symptoms of the virus vary greatly, affecting their hosts in different ways, but all are known to have a negative impact.

Some aspects of the infection have been known to lay dormant in their victims, but can be re-animated into action by other carriers of the virus or emotional hardship.

The most common signs of the infection include any combination of the following: 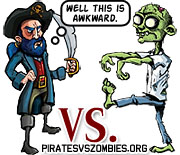 In the most insidious way, the zombie virus is a maker of mediocrity — it often causes its host to forget that they were born to be great.

It convinces victims that the “greatness” of Michaelangelo, Leonardo da Vinci, or Albert Einstein are unattainable exceptions to the human race instead of what they truly were, “ordinary individuals” doing extraordinary things. These people were born, grew up, and pursued their budding interest as amateurs — just like everyone else. But they persisted in their drive to refine their skills, hone their unique talents, and fulfill their potential — and that, they did (at least in the eyes of others).

We know where you’re going with that — and no, you are not Michaelangelo, Leonardo da Vinci, or Albert Einstein — but their unique potential was theirs — not yours. You have your own — and the only person’s unique and incredible potential you should try to live up to is yours. Because you are awesome — whether you realize it or not.

Symptoms of the Zombie Virus

Note: This is not a comprehensive list. Also, if you don’t recognize the context in which a word is used, it may help you to refer to our glossary of terms.

We would like to once again point at that showing signs of the zombie virus does not necessarily make one a “zombie”. That term generally is saved for those exhibiting only the most acute signs of the infection.

It is also worth noting zombies are not “the enemy“, per se — they are victims. As such, they should always be handled with compassion and in a positive fashion — no matter how severely affected they are.

The best offense against zombies and the zombie virus is to set a good example by exhibiting the positive traits of a pirate.

One way to resist the infection is to recognize when we’re not acting in accord to our own true desires or not being the type of person we want to be and to stop doing it — in other words, aim to be genuine & true to ourselves and our own desires.

But often it’s not as simple as simply desiring a change and making it. It also takes effort to find alternative ways of doing things and creating positive habits (“vaccines”) that help eradicate the bad habits (“zombie virus”).

What to do if you discover you’ve been infected:

One of the biggest benefits of realizing you’ve been infected is that it’s like a booster shot against the virus. While it isn’t an antidote — it helps you build up a resistance and it can give you the motivation to break free from the psychological slavery of the infection. Because the more aware we are of our vulnerability to the zombie virus, the better able we are to resist it.